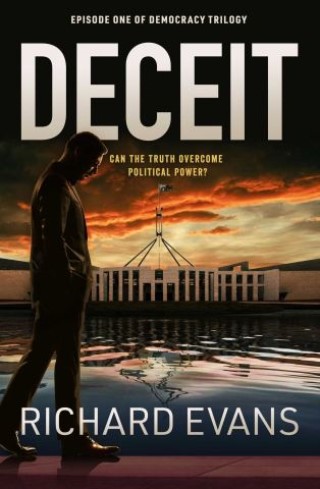 Corrupt Prime Minister Andrew Gerrard has engaged in a covert agreement with the Indonesian president to begin building himself a retirement nest egg – if the Australian government agrees to fund immigration detention centres.

When his plans are disrupted by a tragic plane accident that kills key members of parliament, Gerrard devises a strategy to rush the entire funding scheme through the parliament within a week.

Political stalwart and soon-to-be-retired clerk of parliament, Gordon O’Brien, suspects a conspiracy to defraud the government, and reluctantly sets out to foil the prime minister’s plan with the help of young-gun investigative journalist, Anita Devlin.

The first part in the Democracy Trilogy sizzles with insider knowledge into the machinations of Australian politics. It’s a brilliant and suspenseful political thriller where corruption, power and truth collide.

Richard Evans:
Richard Evans is an author with an eclectic career, which has never been far from controversy. As a political insider, he served as a federal member of parliament for the federal electorate of Cowan in Western Australia during the turbulent 1990s. He now specialises in writing political thrillers and regularly appears as a commentator and columnist on the shenanigans of politics, the economy and business. He lives in the bayside village of Williamstown overlooking the grand city of Melbourne, Australia.