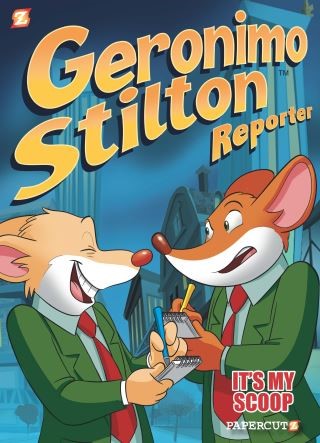 Geronimo Stilton, top reporter for The Rodent’s Gazette, keeps has a reputation of breaking the top news stories first to the citizens of New Mouse City. But lately, Sally Ratmousen of rival Paper “The Daily Rat,” has been leaking Geronimo’s secret scoop! Can Geronimo keep the lid on a surprise celebrity guest to the city’s 100 year celebration or will Sally rat him out?

Geronimo Stilton: Born in New Mouse City, Mouse Island, GERONIMO STILTON is Rattus Emeritus of Mousomorphic Literature and of Neo-Ratonic Comparative Philosophy. He is the director of The Rodent's Gazette, New Mouse City's most widely read daily newspaper. Stilton was awarded the Ratitzer Prize for his scoops on The Curse of the Cheese Pyramidand The Search for Sunken Treasure. One of his bestsellers won the 2002 eBook Award for world's best-selling electronic book. In 2006 he won a Nickelodeon Kids Choice Award and in 2008 he won the Cartoomics prize "Beyond Comics." His works have been published all over the globe. In his spare time, Mr. Stilton collects antique cheese rinds.