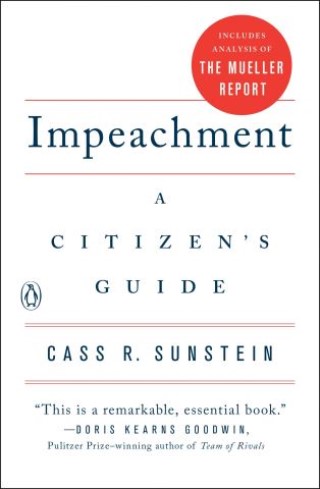 “With insight, wisdom, affection, and concern, Sunstein has written the story of impeachment every citizen needs to know. This is a remarkable, essential book.” —Doris Kearns Goodwin

No one is above the law, not even the president. Impeachment is the most potent tool the founders gave us to ensure it, and yet few of us even know how it works.

As Benjamin Franklin famously put it, Americans have a republic, if we can keep it. Preserving the Constitution and the democratic system it supports is the public's responsibility. One route the Constitution provides for discharging that duty--a route rarely traveled--is impeachment. Expanding beyond violations of the law, impeachment was meant to defend against any action that would undermine the foundations of our republic.

Harvard Law professor Cass R. Sunstein provides a succinct citizen's guide to this essential tool of self-government. Taking us deeper than mere partisan politics, he illuminates the constitutional design behind impeachment and emphasizes the people's role in holding presidents accountable. In spite of the loud national debate over whether or not the House is right to impeach Trump, impeachment itself remains widely misunderstood. Sunstein identifies and corrects a number of common misconceptions, and describes how impeachment helps is an essential piece of our constitutional order, and a crucial part of the framers' decision to install an empowered executive in a nation deeply fearful of kings.

With an eye toward the past and the future, Impeachment: A Citizen's Guide considers a host of actual and imaginable arguments for a president's removal, explaining why some cases are easy and others hard, why some arguments for impeachment have been judicious and others not. And with an afterword and appendix on the current impeachment, it puts the national debate in its proper historical context. In direct and approachable terms, it is a guide through the treacherous waters of the impeachment process so that Americans of all political convictions may use their ultimate civic authority wisely.

Cass R. Sunstein: Cass R. Sunstein is the Robert Walmsley University Professor at Harvard University, where he is founder and director of the Program on Behavioral Economics and Public Policy. He is the most cited law professor in the United States and probably the world. He has served as administrator of the White House Office of Information and Regulatory Affairs and as a member of the President’s Review Group on Intelligence and Communications Technologies. Winner of the 2018 Holberg Prize, Sunstein is a columnist for Bloomberg View and a frequent adviser to governments all over the world. His many books include the bestsellers Nudge: Improving Decisions About Health, Wealth, and Happiness (with Richard H. Thaler) and The World According to Star Wars.