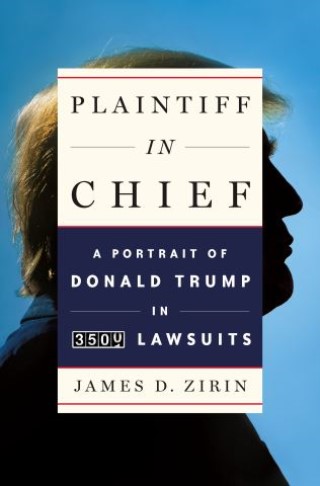 A Portrait of Donald Trump in 3,500 Lawsuits

Unlike all previous presidents who held distinguished positions in government or the military prior to entering office, Donald Trump's political worldview was molded in the courtroom. He sees law not as a system of rules to be obeyed and ethical ideals to be respected, but as a weapon to be used against his adversaries or a hurdle to be sidestepped when it gets in his way. He has weaponized the justice system throughout his career, and he has continued to use these backhanded tactics as Plaintiff in Chief.

In this book, distinguished New York attorney James D. Zirin presents Trump's lengthy litigation history as an indication of his character and morality, and his findings are chilling: if you partner with Donald Trump, you will probably wind up litigating with him. If you enroll in his university or buy one of his apartments, chances are you will want your money back. If you are a woman and you get too close to him, you may need to watch your back. If you try to sue him, he's likely to defame you. If you make a deal with him, you had better get it in writing. If you are a lawyer, an architect, or even his dentist, you'd better get paid up front. If you venture an opinion that publicly criticizes him, you may be sued for libel.

A window into the president's dark legal history, Plaintiff in Chief is as informative as it is disturbing.

James D. Zirin: JAMES D. ZIRIN is a former Assistant United States Attorney for the Southern District of New York, where he served in the Criminal Division under the legendary Robert Morgenthau. His writing has appeared in major periodicals such as Forbes, The LA Times, The London Times, Washington Times, The Nation, and the New York Law Journal. He is a member of the Council on Foreign Relations. A graduate of Princeton University, Zirin received his law degree from the University of Michigan Law School.