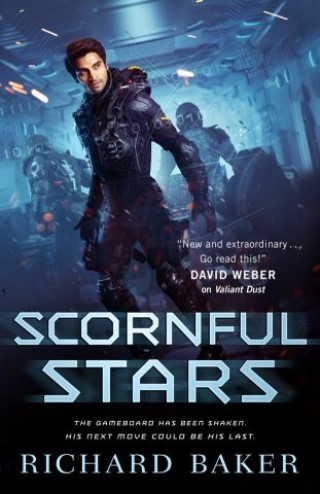 Richard Baker continues his new military science fiction series, Breaker of Empires, with vivid space battles and elements of politics and cultural heritage, picking up where Valiant Dust and Restless Lightning have led.

Now a captain, Sikander Singh North commands the destroyer Decisive, assigned to Zerzura, a haven for piracy and the next playing-board in the Great Game. The Aquilan Commonwealth and the Empire of Dremark vie for the allegiance of local ruler Marid Pasha, a competition with stakes that reach far beyond the sector's pirate-infested limits.

Sikander must stop the pirate attacks while charting his course between the ambitions of Marid Pasha, a dubious alliance with a shipping magnate, and the inexperience of Decisive’s crew...a situation that only grows more complicated when an old enemy returns.

At the Publisher's request, this title is being sold without Digital Rights Management Software (DRM) applied.

Richard Baker: RICHARD BAKER is a former United States Navy officer and a well-known game designer as well as the author of several novels, including the New York Times bestseller Condemnation and the highly acclaimed The Last Mythal trilogy. His game design credits include the Alternity Science Fiction roleplaying game, and the Axis & Allies Naval Miniatures Game—the bestselling naval wargame.