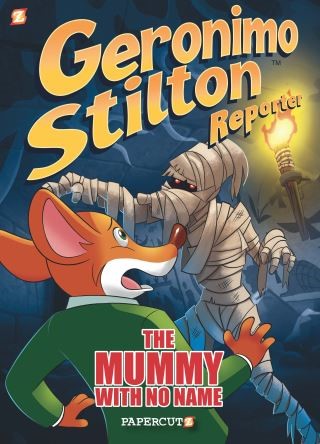 The Mummy With No Name

When reports of a mummy terrorizing the New Mouse City Museum flood the phone lines, Geronimo Stilton, editor-in-chief of the Rodent’s Gazette, is on the job! Geronimo is certain there is a logical explanation to all this, seeks to debunk the theory and prove that there’s no mummy. Will Geronimo get wrapped up in more than he can handle? Is he about to become ancient history? Is there something, or someone, really lurking in the shadows of the New Mouse City Museum?

Geronimo Stilton: Born in New Mouse City, Mouse Island, GERONIMO STILTON is Rattus Emeritus of Mousomorphic Literature and of Neo-Ratonic Comparative Philosophy. He is the director of The Rodent's Gazette, New Mouse City's most widely read daily newspaper. Stilton was awarded the Ratitzer Prize for his scoops on The Curse of the Cheese Pyramidand The Search for Sunken Treasure. One of his bestsellers won the 2002 eBook Award for world's best-selling electronic book. In 2006 he won a Nickelodeon Kids Choice Award and in 2008 he won the Cartoomics prize "Beyond Comics." His works have been published all over the globe. In his spare time, Mr. Stilton collects antique cheese rinds.