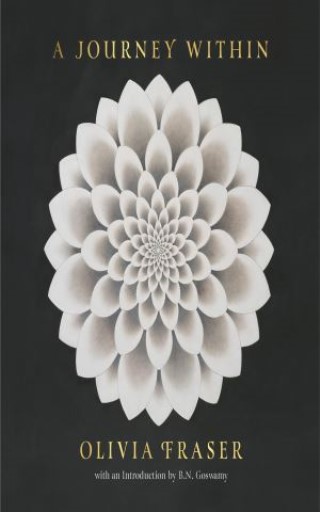 A Journey Within documents Olivia Fraser's acclaimed paintings over the last decade, which reflect her remarkable inner quest towards elaboration by simplification. Following her induction into Indian miniature painting in a traditional Jaipur atelier, Fraser's focus shifted from painting the world around her to depicting a landscape more metaphysical in nature. Trained by her Jaipuri gurus, she learned to grind and mix mineral pigments to their correct consistency. She is especially influenced by Nathdwara pichwai paintings and early nineteenth-century Jodpuri Mansingh-period imagery, produced by the Nath yogis, whose visual language reaches back to an archetypal iconography rooted in India's deepest and most philosophical artistic heritage - complex abstract thoughts captured in seemingly simple visual language. The work Fraser has produced inspired by these twin muses is nevertheless profoundly contemporary, breaching both temporal and geographical borders, emerging as it does from her twin life between East and West.

Olivia Fraser: Olivia Fraser is an artist, whose works have been displayed in various galleries and art fairs around the world. Her paintings were part of Frontiers Reimagined, a collateral event at the 56th Venice Biennale, in 2015. She also had a solo exhibition at Grosvenor Gallery, London, in June 2018.